Another blog from Herve Millet

Another week flew by. The government has announced elections for the president and the parliament for the 20 November 2020. A lot of people doubt that they will be held because of the security situation.

This village is one of the 3 villages in the red zone, meaning that I am not visiting them.

In this village we started by realizing a water well in the yard of the school, after which we built 3 new class rooms for this primary school. In October 2019, we opened our 6th nursery school in this village.

This year we helped them to build a “Maison de la Femme”. It was completed early this month and Odile went to the village to give the keys to the women.

One of the reasons of why so many projects in such a short period of time is the motivation of the villagers. They really help in the construction. Water is brought by the women and men help for construction work. They also have good leaders and projects are well followed up after their realization.

The Maison de la Femme is composed of a house with 2 rooms, one covered area and one toilet.

The villagers had chosen a location of this house in the center of the village. It took the contractor only 6 weeks to build it with the help of the population. 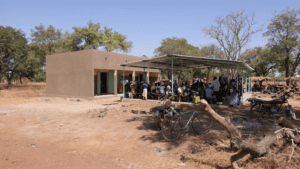 This project was realized with the financial support from NASF (Nederland Albert Schweitzer Fonds) and A Petits Pas (France).

We have a “Maison de la Femme “ in most of the villages where we are active. It is a neutral zone for the women. Most of the women in villages in Burkina have no possessions. The land and house are from the men, even children older than 7 years old are ”owned” by the men,.

It has several impacts:

In Sidi 2, it looks like it will take a center place in the market of the village.

Proverbs of the week

In the end, it’s not the years in your life that count. It’s the

\life in your years. Abraham Lincoln

Life is really simple, but we insist on making it complicated. Confucius

Next week I have planned a trip to the LAP and a meeting at the primary school of Sokourani.

Have a good week,